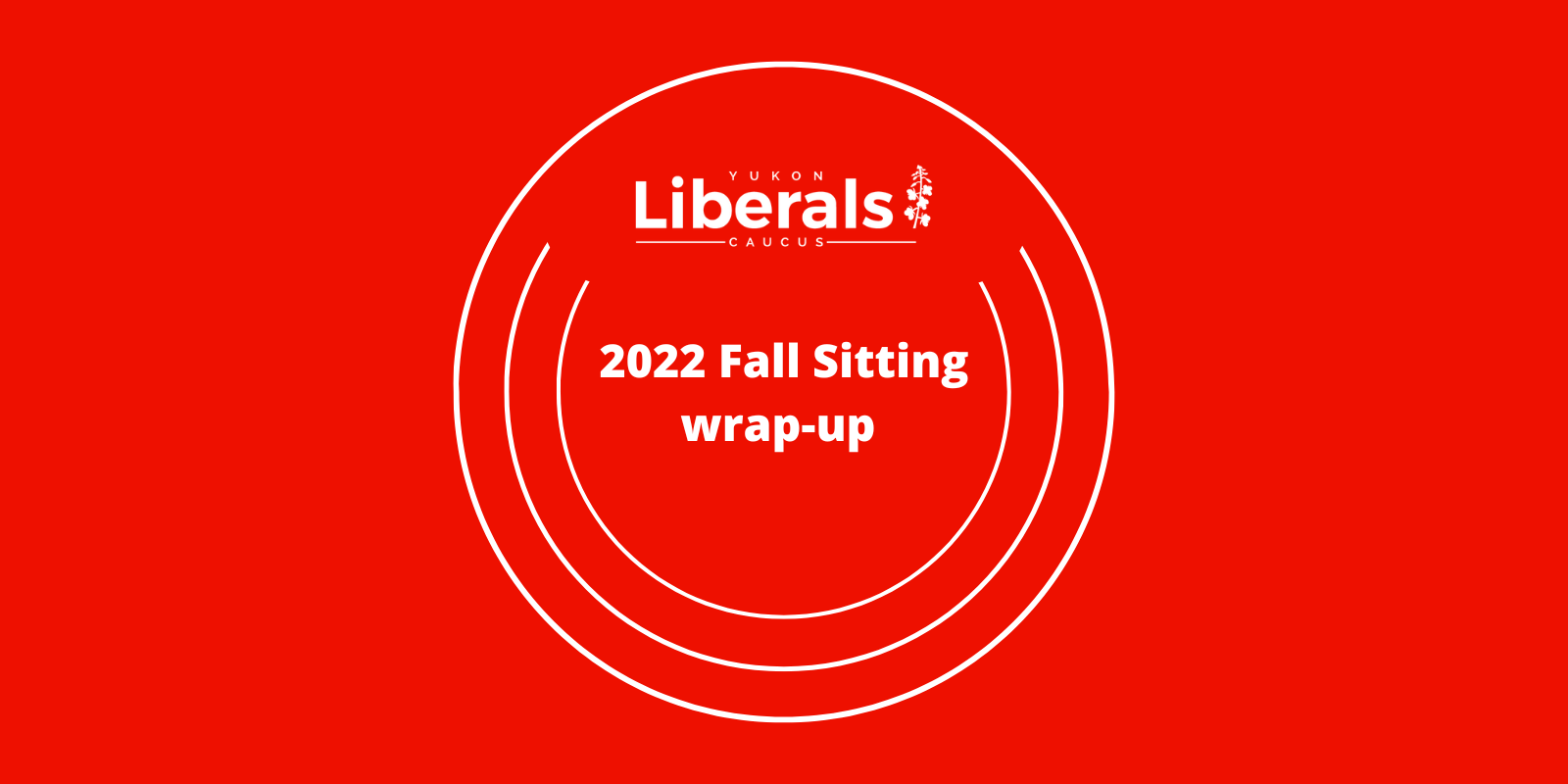 The fall sitting of the Yukon Legislative Assembly wrapped up yesterday.

It was another successful sitting for the Yukon Liberal government.

The Liberal Caucus was particularly pleased to see the NDP and the Yukon Party support the Carbon Price Rebate Amendments Act.  We have just seen the results of the new federal requirements on carbon pricing in other parts of the country.  The NWT and the Maritimes had to give up their exemptions, including for home heating fuel.  With unanimous support in the Legislative Assembly, the Liberal government was able to adapt our made-in-Yukon rebate program to ensure it will continue to support municipalities, First Nations governments and Yukon businesses, including our placer miners. Thanks to Premier Silver’s Liberal government, 100% of revenues from carbon pricing collected by the federal government are returned to Yukoners.  And as Minister John Streicker noted in the Assembly, on average, 85% of Yukoners will get back more money than they are paying in to carbon pricing.

National Day for Truth and Reconciliation is an important day to honour the survivors and families of communities impacted by residential schools in Canada and the continued trauma faced by indigenous communities throughout the country.

The supplementary budget was also passed, which included money to support the extraordinary response to fires and floods this year, as well as money to provide the $150 Inflation Relief Rebate to all residential and commercial customers in the territory.  This rebate was expanded this fall, and customers continue to see the rebate on their electrical bills.

Liberal MLAs announced a number of other inflation relief measures this fall, including a $50 per cord firewood rebate, and additional money for those most in need, including those receiving Social Assistance, the Pioneer Utility Grant and foster parents.

The Yukon Liberal government continue to invest in making life more affordable for Yukoners, and we are doing it responsibly.

The government retained its ‘AA Stable’ credit rating from Standard and Poor’s this year as a result of a strong history of financial management in producing solid and stable financial results for the territory.

The government also received the second highest grade of all provinces and territories in the latest C.D. Howe Institute’s assessment on fiscal transparency of budget materials and financial statements.

We know how important it is to manage the public purse in a responsible manner, and we have upheld that responsibility throughout our time in office – and we are seeing results.

We continue to lead the country in GDP growth at 10%.  Our economy is booming and that is creating a lot of opportunities for Yukoners and businesses.

The Liberal government has also honoured its commitment to openness and transparency.

A number of witnesses appeared in the Legislative Assembly this sitting, including:

In the past, under the Yukon Party government, it was rare to have the opportunity to hear directly from these people in the Assembly, but the Liberal government has made it a priority to bring them in to the Assembly each year so Yukoners can stay informed.

This was also Klondike MLA Sandy Silver’s last sitting in the Assembly as the Premier of the Yukon.

It has been a profound honour to lead such a dedicated team and I am incredibly proud of what we’ve accomplished, and the important work that is underway to keep moving the territory forward.

The territory is in a much stronger place than when we formed government in 2016 and I believe it continues to move in the right direction.

Sandy Silver is the most successful Liberal Premier in the history of the Yukon. We thank him for his strong leadership and helping move the territory forward.