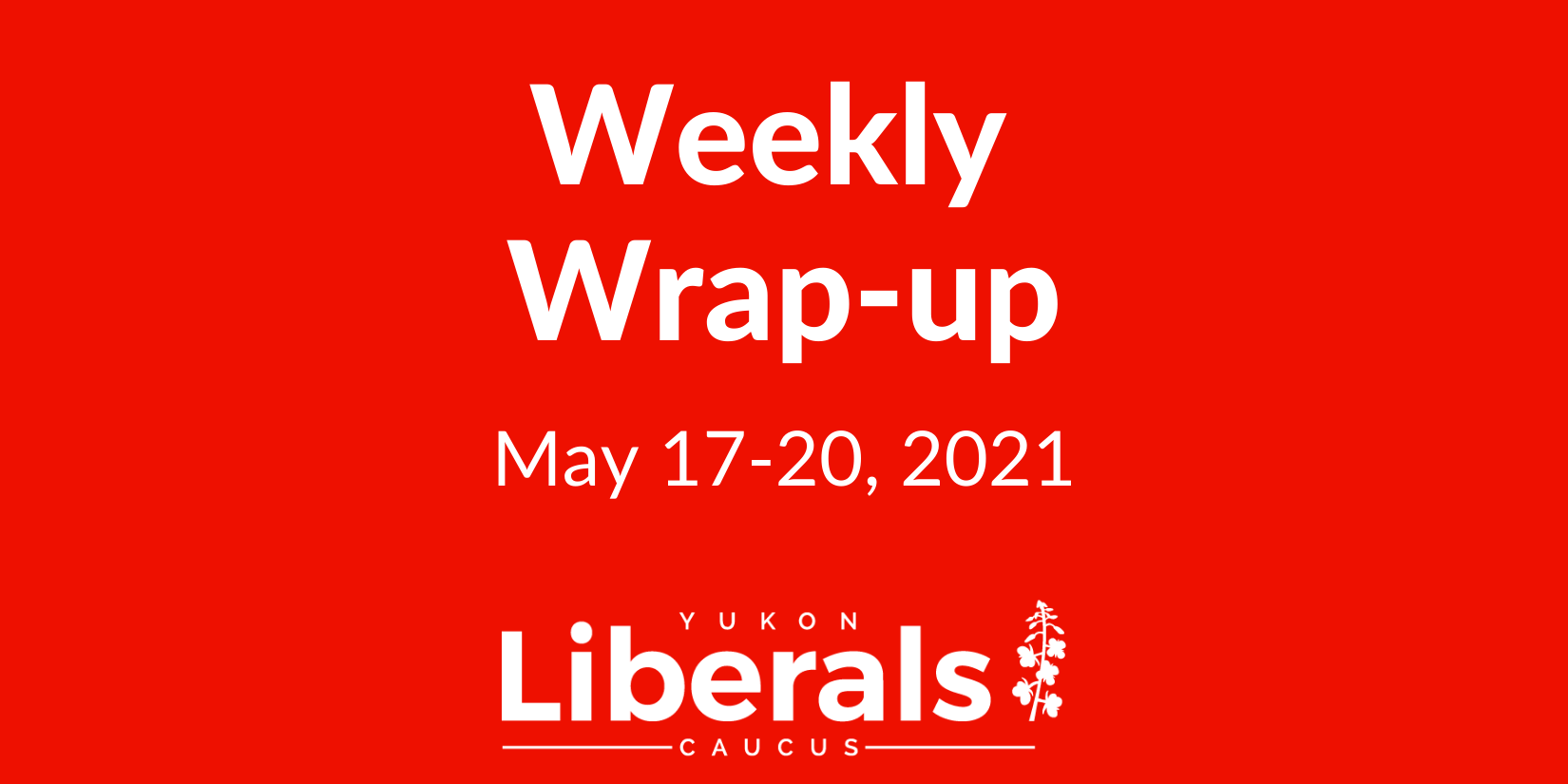 Here is a look at what happened in the Yukon Legislative Assembly this week.

Vaccine milestone and lifting of restrictions

This week we reached an important and exciting milestone in our fight against COVID-19. On Monday, Minister of Health and Social Services Tracy-Anne McPhee announced that more than 75 per cent of eligible adults in the Yukon have now received their first shot of the vaccine. This is great news for the Yukon and for Canada.

Our Caucus extends a deep, heart-felt thank you to Team Balto, Team Togo, and Team Fox, along with all of our dedicated public servants who have contributed to the vaccine effort.

We are leading the country when it comes to vaccinations. Canada’s Chief Public Health Officer Dr. Theresa Tam recently called the Yukon “a model that we’re all looking toward for success.”

Details about the youth vaccine rollout were released earlier this week. The first clinic opens on May 31 and all youth age 12 and up will be able to receive their first shot before the end of the school year.

We continue to encourage our youth, and all Yukoners, to step up and get their shot to help protect our communities.

The success of Yukon’s vaccine rollout means that restrictions will start to be lifted as of May 25th.  Find out more: https://yukon.ca/en/news/public-health-restrictions-be-lifted-may-25

On Wednesday, Minister of Highways and Public Works Nils Clarke provided an update on the Dempster Fibre Project.

During their time in government, Yukon Party started looking into different fibre routes, but nothing happened beyond that. During the 2016 election, the former Yukon Party leader stated that the fibre line was in the works. That was not true as there was no plan, no consultation had been done, and there was no budget. In short, the Yukon Party never got it done.

“It wasn’t until our Liberal government was elected that we made real headway. Less than five years after taking office, our Liberal government has secured funding with the Government of Canada for nearly $60 million, negotiated a deal with Northwestel to operate and maintain the line at no cost to government, secured the permits, and gotten shovels in the ground.”
– Highways and Public Works Minister Nils Clarke

Our Liberal Caucus is committed to reviewing Yukon’s Child Care Act.  We do not agree with the Yukon Party’s suggested approach to put the review in the hands of multiple elected officials instead of industry experts. Health and Social Services Minister Tracy-Anne McPhee has committed to undertaking a more comprehensive approach that engages stakeholders properly.

On Thursday Minister of Health and Social Services Tracy McPhee tabled a motion to establish a Special Committee on Electoral Reform. This all-party committee would examine electoral reform, engage Yukoners and report back by March 31, 2022. We look forward to debating this motion next week.

Minister Jeanie McLean paid tribute to the International Day Against Homophobia, Transphobia and Biphobia (May 17).

She acknowledged advocates on the frontlines and community organizations working hard to provide support and resources to LGBTQ2S+ Yukoners.

“We became the fourth jurisdiction in Canada to ban conversion therapy for minors after Whitehorse’s high school students brought forward their vision for a future that provides safety for not only themselves but for the generations to come.”

Despite progress towards a more inclusive society, Minister McLean also noted there is still much more to be done to eliminate barriers for the LGBTQ2S+ people in accessing health care, education, recreation, public facilities, and even travel because of their identity.

You can watch the full tribute on the Yukon Legislative Assembly’s Facebook page here: https://www.facebook.com/yukonlegislativeassembly.

On May 20, Minister Ranj Pillai paid tribute to Asian Heritage Month, recognizing the diverse experiences of Canadians of Asian descent and calling for an end to the discrimination many still face.

He shared the beginning of a profound poem by Yukon resident and Asian Canadian artist Christopher Tse.

You can watch the full tribute on the Yukon Legislative Assembly’s Facebook page here: https://www.facebook.com/yukonlegislativeassembly.