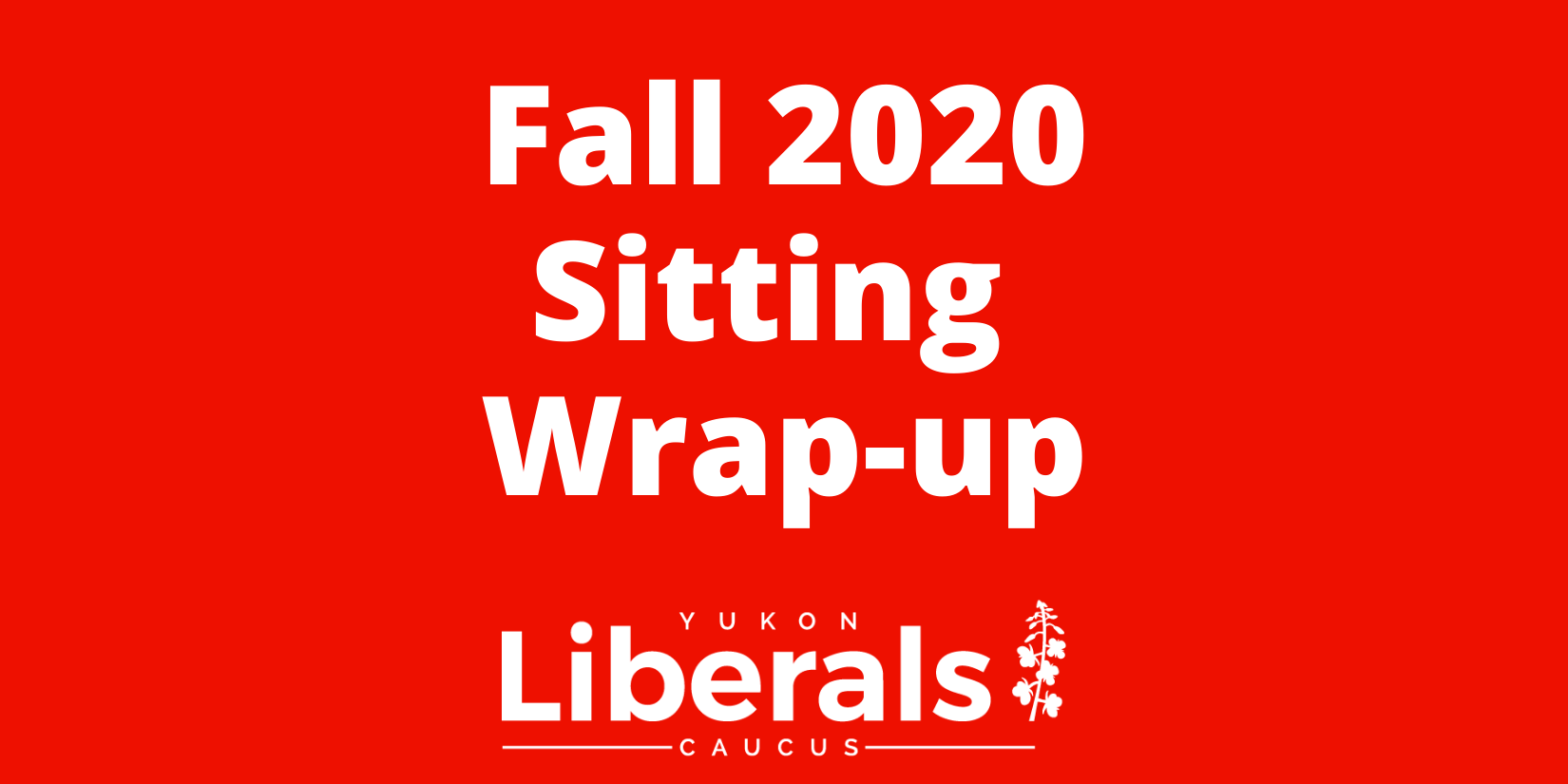 This fall’s legislative sitting was the longest in more than 25 years. Here are some of the highlights of a marathon sitting.

A Liberal government motion to establish an all-party committee to review Yukon’s Civil Emergency Measures Act (CEMA) passed. The committee includes a representative from each of the three parties in the Legislative Assembly and will consider and identify options for modernizing CEMA, as well as make recommendations on possible amendments to the Act. We know that CEMA should be reviewed and we want to hear from Yukoners about how it should be updated. Community Services Minister John Steicker will represent the Yukon Liberal Caucus on the committee, which is due to submit a report to the Legislative Assembly on its findings and recommendations by August 31, 2021.

The Second Appropriation Act 2020–21 includes an increase of $95.9 million in Operations & Maintenance gross spending, with an offsetting increase of $58 million in Operations & Maintenance recoveries. The increased spending provides economic and social supports along with expanded health services for Yukoners as part of the government’s response to the COVID-19 pandemic. The supplementary budget also includes funding to begin implementing the Putting People First plan to improve Yukon’s health and social services.

Yukon’s Tourism Relief and Recovery Plan includes investments of up to $15 over three years to provide much needed relief and guide recovery for Yukon’s valued tourism industry.

The plan includes tourism-specific supplements to the Yukon Business Relief Program and enhancements to the Tourism Cooperative Marketing Fund.

“Combined with the Yukon government’s other business relief efforts, the Tourism Relief and Recovery Plan will ensure the survival and recovery of Yukon’s tourism sector and equip the industry to return to full capacity and growth sooner and more resilient than ever. I want to thank all of our tourism partners across the territory for showing leadership throughout the pandemic. We will continue to work in partnership to rebuild Yukon’s vibrant tourism sector.” – Tourism and Culture Minister Jeanie McLean

Conversion therapy banned in the Yukon

Conversion therapy is now banned in the Yukon thanks to the Sexual Orientation and Gender Identity Protection Act. Our Liberal Caucus applauds this important step towards a more inclusive Yukon for lesbian, gay, bisexual, transgender, queer, Two-Spirit plus Yukoners (LGBTQ2S+).  It is our belief that everyone should occupy space that is safe and inclusive.

Leave for victims of domestic and sexualized violence

Amendments made to Yukon’s Environment Act allow for a ban on single use products and packaging in the territory.  The ban will help to meet the territory’s waste reduction goals.

“Single-use packaging is a growing problem, but one we can address by reducing the amount of single-use products we use in the territory.  Banning single-use packages and products will help Yukon align with national and international efforts to reduce waste in our environment and landfills” – Environment Minister Pauline Frost

“Establishing a fixed date for Government of Yukon elections will strengthen the overall democratic process and provide for efficiencies in democratic procedures and planning. Yukoners will also benefit from increased fairness, transparency and accountability by knowing when they can vote for their next government.” ­- Premier Sandy Silver

Our Clean Future: A Yukon strategy for climate change, energy and a green economy is an ambitious, territory-wide plan that puts us on a course to reduce Yukon’s greenhouse gas emissions by 30 per cent by 2030.  Porter Creek Centre MLA Paolo Gallina brought forward a motion calling on all MLAs to support meeting or exceeding the targets laid out in Our Clean Future, including the greenhouse gas emissions and renewable energy targets. The 10-year strategy sets ambitious targets to increase renewable electricity on Yukon’s main grid to 97 per cent and increase renewable heating in Yukon buildings to 50 per cent. It also includes a target of reaching net zero emissions for Yukon’s entire economy by 2050. Our Caucus is proud to support the actions set out in Our Clean Future that will set Yukon on the path to a resilient, sustainable future.

On December 10th Changing the Story to Upholding Dignity and Justice: Yukon’s MMIWG2S+ Strategy was released. Yukon is the first jurisdiction in Canada to reveal a strategy in response to the final report of the National Inquiry into Missing and Murdered Indigenous Women and Girls. The signing of the strategy by territorial, regional and national leaders took place during a sacred fire ceremony on the traditional territory of the Kwanlin Dün First Nation and the Ta’an Kwäch’än Council.

I am so proud of this strategy and of the work that got it to this day. This is a starting place, and we still have much work to do, but the family members, advocates, leaders and members of the Yukon Advisory Committee should take a moment to reflect on this incredible accomplishment.” – Minister responsible for the Women’s Directorate Jeanie McLean

As of November 1, the territory is permanently on Yukon time!  After a motion was brought forward in May 2017 by Porter Creek Centre MLA Paolo Gallina, the government asked Yukoners about ending seasonal time change. 93 per cent of Yukoners who responded want seasonal time changes to stop.

Our Caucus is glad the Liberal government listened to Yukoners and ended seasonal time change. Yukon is now leading the charge on this growing movement.

The Canada-Yukon Housing Benefit prioritizes households in need by providing additional support to hundreds of households across the territory between now and 2027. Depending on household income and size of family, applicants can receive between $200 and $800 per month.

“Our Liberal government recognizes that stable, affordable housing is foundational to the health and well-being of all Yukoners. The Canada-Yukon housing benefit will help us achieve a key goal in the housing action plan for Yukoners by increasing access to adequate and affordable market and nonmarket rental housing.” – Housing Minister Pauline Frost

This fall, Minister of Community Services John Streicker announced the launch of the largest ever lottery and tender of lots in Whitehorse.  Making lots available in Whitehorse is another way the Liberal government is helping to meet the need for housing in Yukon.

The Government of Yukon is accepting lottery applications and tenders for 257 lots in Whitehorse. They include 140 single family lots, one duplex lot, 91 townhouse lots, 11 multi-family lots and eight commercial lots in Whistle Bend, as well as five country residential lots in Hidden Valley.

“Growing families are wanting larger homes, seniors and empty-nesters are looking to downsize to townhouses or single-storey homes, and other Yukoners are in the market for the first time. That is why it is so important that we have a good variety of lots.” – Minister John Streicker

The fourth intake of the Housing Initiatives Fund launched this fall. It provides funding to support the construction of affordable housing for Yukoners across the territory.

First Nations governments, First Nations Development Corporations, contractors, developers, community organizations and the general public can apply for this $3.6 million annual fund to support projects that will increase affordable housing options in their community. Over the past three intakes, this program has successfully supported projects that will lead to over 350 new affordable homes in Yukon communities.

“One important project that I would like to highlight is Normandy Manor. Once completed, this privately owned and operated seniors supportive housing project in Whitehorse in the Takhini subdivision will provide 84 new housing units. This is one of the positive steps taken by our government to alleviate the ever-growing pressure for reliable housing for our elderly population.” – Minister Pauline Frost

Yukon now has a Lobbyist Registry

Lobbyists are now required to register if they are meeting with any public office holder in Yukon. This includes meetings with Ministers, all MLAs, and all public servants. Lobbyists are responsible for entering their information into the registry, and the registry is overseen by the Conflict of Interest Commissioner.

This is an important commitment that was made to Yukoners in 2016 and we are very proud to see this commitment fulfilled.

Check out the registry website to learn more about who qualifies as a lobbyist, timelines and more at https://yukonlobbyistregistry.ca/en