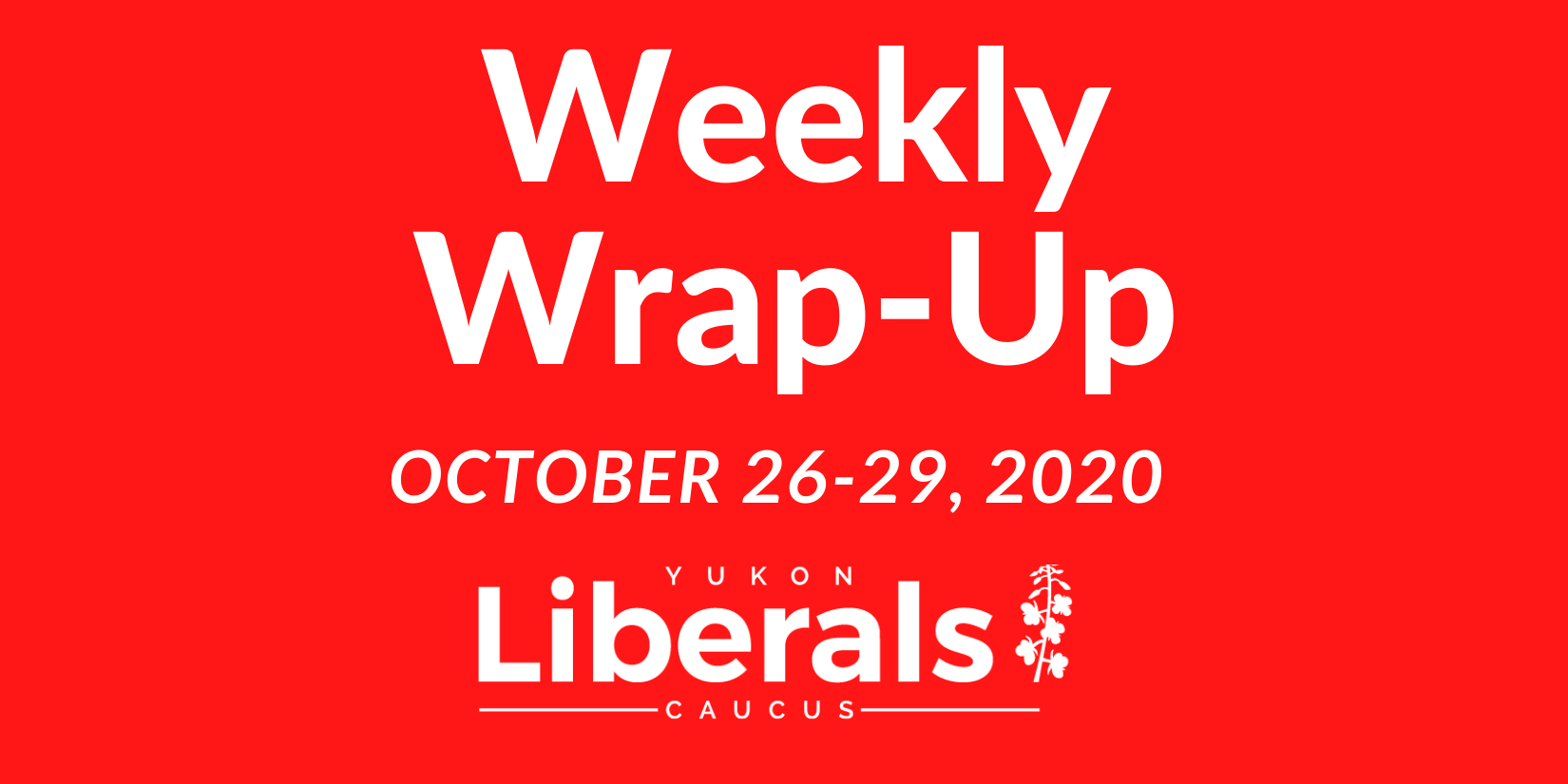 Here is our quick take on a few things that happened in the Legislature over the past week!

The times, they aren’t a changin’! Earlier this year, the decision was made by the Liberal government to end seasonal time change. That means that come November 1, 2020, Yukoners will not change their clocks. We will now be on Yukon Time all year long – meaning during the winter months we will be at the same time as Alberta, and the summer months the same time as B.C. This will mean the sun will stay up later in the day during those long, dark winter days.

Minister Streicker spoke on this important topic in the Legislative Assembly this week. You can read the statement here:  https://yukonassembly.ca/sitting-day/34-3-055

On Thursday October 29, Minister McLean gave a tribute in recognition of Air North – Yukon’s Airline. In July, they were awarded the “Travelers Choice Best Airline in Canada” award from Tripadvisor. Air North has made so many contributions to our community and the award came to no surprise to Yukoners.

Minister Mclean also spoke about how now more than ever, in the face of a global pandemic, all Yukoners need to support local as much as they can.

You can view the tribute here: https://yukonassembly.ca/index.php/sitting-day/34-3-055

This week Minister McPhee, Minister of Justice and Education, discussed the settlement reached between the Government of Yukon and the commission scolaire francophone du Yukon (CSFY) over a lawsuit that has lasted more than a decade.  After the former Yukon Party government spent upwards of $3 million on legal fees fighting the CSFY, our Liberal Caucus was pleased to see the government settle the case and re-establish a positive, collaborative relationship with the CSFY.

Part of the settlement included the building of a French First Language Secondary School, which is on track to be open for students in mid-November. It is a very innovative space, representing a modern and flexible learning space for students and community groups. It is also a great example of a successful project that was designed, managed and built locally.

The CSFY held a community contest to come up with a name for the high school – it will now be called the “Centre scolaire secondaire communautaire Paul-Émile Mercier’.

The settlement of the lawsuit and the construction of the new school reflects a renewed partnership between our government and the CSFY, and we are excited to see what the future has in store for the bright young students attending Whitehorse’s newest high school.

Yet again, the conservative Yukon Party has filibustered to avoid a vote. Debate continued on Wednesday around whether or not MLAs support the Yukon being in a state of emergency. Rather than being clear and choosing a side in the debate, the Yukon Party put forward several amendments in order to avoid telling Yukoners whether or not they agree that a global pandemic should be grounds for a state of emergency. Previously, the member for Lake Lebarge spoke for a total of 96 minutes on this motion, before proposing an amendment to further delay debate. It is clear they do not want the house to vote on this important issue.

We believe declaring a state of emergency back in March was the right decision because it allowed government to be more response to the needs of Yukon throughout pandemic. Under the state of emergency, the government has introduced border restrictions to keep Yukoners safe as well as support for Yukon tenants and landlords impacted by COVID-19.

We challenge the Yukon Party to be clear and tell Yukoners whether or not they agree that Yukon should be in a state of emergency. It’s a simple question – yes or no. Why won’t they vote?

On Monday, October 26, two pieces of legislation passed through 3rd reading in the Legislature – Bill #9 – Sexual Orientation and Gender Identity Protection Act and Bill #10 – An Act to Amend the Employment Standards Act.

Both these pieces of legislation take big steps towards increasing supports for Yukoners – through banning conversion therapy and ensuring that those who have experienced domestic and sexualized violence are able to take paid and unpaid leave from their jobs.