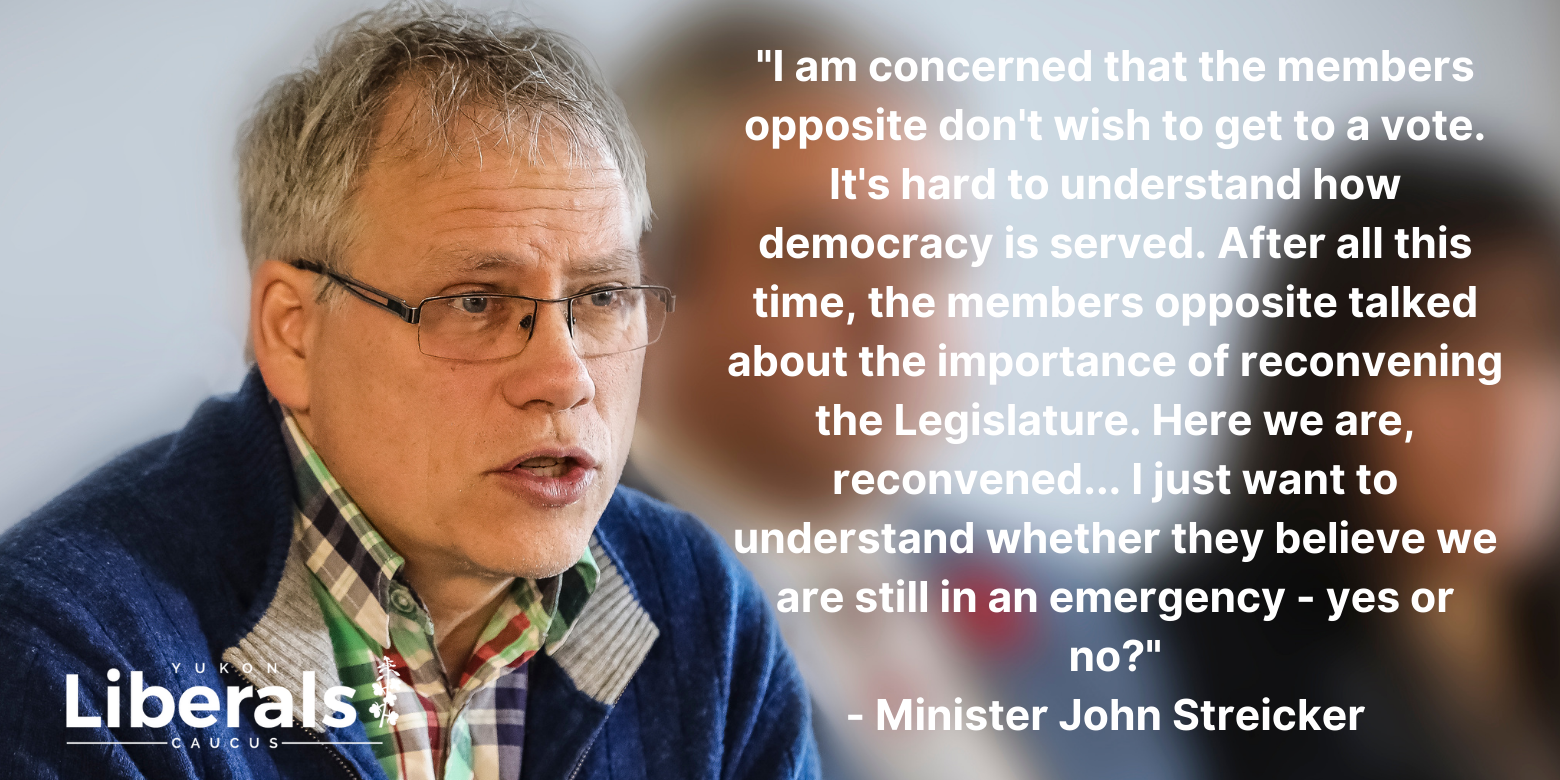 Below is a transcript of a speech made by Minister John Streicker in the Legislature on Wednesday October 28, 2020.

This motion that we are debating the amendment on right now was a motion that we brought forward — the Member for Copperbelt North brought it forward two weeks ago. We brought it back again today. Clearly, we believe that it is an important motion, and we are hopeful to get to a vote.

It is a pretty simple motion: Do members of this Legislature support the state of emergency — yes or no? As the members opposite have risen to debate the amendment, they have continued to say a range of things and I’m still not certain whether they support a state of emergency.

It’s because they’ve said it’s complicated — and I agree with that statement. They’ve also said that there’s a range of perspectives from constituents of theirs and they believe that.. (POINT OF ORDER)

I’m trying to understand with this amendment whether the purpose of it is in support of the motion as it stands or whether it is a stand-alone piece. I really hope we do get to a vote.

I am concerned that the members opposite don’t wish to get to a vote. It’s hard to understand how democracy is served. After all this time, the members opposite talked about the importance of reconvening the Legislature. Here we are, reconvened, and it is us who brought this motion forward, yet we don’t seem to be getting to a vote.

The members opposite have talked about Ontario as an example and talked about how that legislature works under their civil emergency measures act. Terrific. I think that there are a range of possibilities for the Civil Emergency Measures Act. We have all stood in this Legislature and discussed how the one that we have here needs updating, but it’s not correct that, across the country, all civil emergency measures acts come to the legislatures. It’s not correct that ministerial orders come to the legislatures.

In fact, there are only two legislatures where it is the case that an extended state of emergency is required to come back to the legislature, and one is Ontario, and the other is Alberta, but the rest do not. It’s also true about those ministerial orders, but it’s also true, in those other legislatures, that they have many more active committees.

What I can say is that, when we brought forward ministerial orders and there was a request to reconvene the Legislature, what we did turn around and do is offer to come in and sit in this Legislature and have questions and answers from me, other ministers, and deputy ministers on all of the ministerial orders. Was that accepted? No.

On May 21, that letter was sent by the Government House Leader. Again, on June 5, that letter was sent, and again, the request was declined. How is it that there is an interest to understand about ministerial orders, as proposed in this amendment, yet there was a declination by the members opposite to have that conversation? It is confusing to me that there is this difference of opinion, and I would really love to see some solid conversation on ministerial orders. Let’s talk about them a bit.

The basic content of the ministerial orders is to protect the health and safety and wellness of Yukoners — flat out. Flat out. I am glad that the Member for Porter Creek North directed citizens to the website. They are all up there, open and transparent. They are there for all to see. I would love to have that debate, but 15 days of this Legislature and 75 questions from the members opposite, and we have had one on ministerial orders. What was that one about? It was about reinstating a ministerial order. It wasn’t about “Okay, we have problems with these other ones.” No, it was “Let’s bring this one back.”

Over the summer, I looked for all of the questions that have come from the members opposite — and there have been a couple of times today when the opposition members have said that we haven’t replied. If I have missed something, I want to apologize to Yukoners and the members opposite today, but I don’t think I have. I have gone back and looked through every casework. In fact, I looked through all of my colleagues’ casework to try to understand: Have we been getting a lot of questions on ministerial order? No. The Minister of Highways and Public Works has had one from the Member for Whitehorse Centre about driver’s licenses and medical exams. Just a reminder to all Yukoners: What we said was, “Hey, because going to the doctor is a problem right now, we’re not going to force you to lose your license. We are going to extend it.” That was one of the ways in which we were supportive. I am curious if the members opposite disagree with that.

I have had one letter as well, to be fair, from the Member for Porter Creek North where she asked about the number of travelers who have come through the territory, which is related to a ministerial order, of course, although it is not direct. Yes, I had a letter and I responded. I would even table that response in the Legislature and that exchange — it wasn’t terribly respectful to the public service, I will say now heard one about the education rules. I will go back and check on that one. I know that what we were doing was trying to support schools to make them as flexible as possible so that we could deal with keeping our kids safe. There it is. That is what that order is about. Let’s debate it.

The main orders that are there are about isolation requirements and about border control. I would love to know from the members opposite whether they disagree with that, but here’s where I want to start. I just want to understand whether they believe that we are still in an emergency — yes or no?

We have other orders there. We have ones about protecting people from being evicted if they are self-isolating. Is that the one they want removed? We have an order in there about where we extended property tax deadlines. I have heard some criticism about taxation, where we extended property tax deadlines. Okay — maybe they didn’t like that one — fair enough. And I don’t disagree with them that, if we had been in debate here, that they would have and could have provided more information and alternative perspectives, and I encourage that — I don’t discourage it.

But, given that we have been two days on this motion and we are on our second amendment and it keeps moving off of the target of trying to talk about whether the members of this Legislature believe that we are still in an emergency or not, I am concerned.

In fact, this amendment that was brought forward was a motion that was tabled — a written motion — by the Member for Lake Laberge, I believe, on October 5. Okay — terrific — so, then, why didn’t we debate it? Because on October 7, we actually had a private members’ day here. What did we debate? We debated a select committee, which is terrific — that is an important topic, but it wasn’t the one that they chose and we, again, had a private members’ day on October 21 — one week ago — and we had an opportunity again to debate here. We debated another important topic — support for the local aviation industry. Great — but if the members opposite are trying to say that we are not supporting democracy because we are preventing them from coming forward, then — out of this Legislature — when we unanimously agreed, in the face of a pandemic, to adjourn this Legislature and we unanimously agreed to reconvene this Legislature on October 1 — which happened — and we unanimously agreed to sit for 45 days to try to do the work of this Legislature, when are the members opposite going to bring forward the concerns that they have been saying that we have been blocking them from bringing forward, while we sit here?

I have had one question from the members opposite about ministerial orders and it has been about putting back in place a ministerial order to support online cannabis purchasing through our great private cannabis retailers. I tell you, Mr. Speaker, I want to bring that forward, but we felt that it was inappropriate to use the authority of the Civil Emergency Measures Act to do that because it is not an emergency, because now, we’re in phase 3.

I agree that this is an important conversation. What I disagree with is that it’s tied to whether or not we’re in a state of emergency. That’s how simple it is. I just hope that the members opposite will allow us to get to a vote on that simple and straightforward question on a complex issue, where there is a range of perspectives, and I would just like them to be clear on whether they support the state of emergency today, as we go forward.