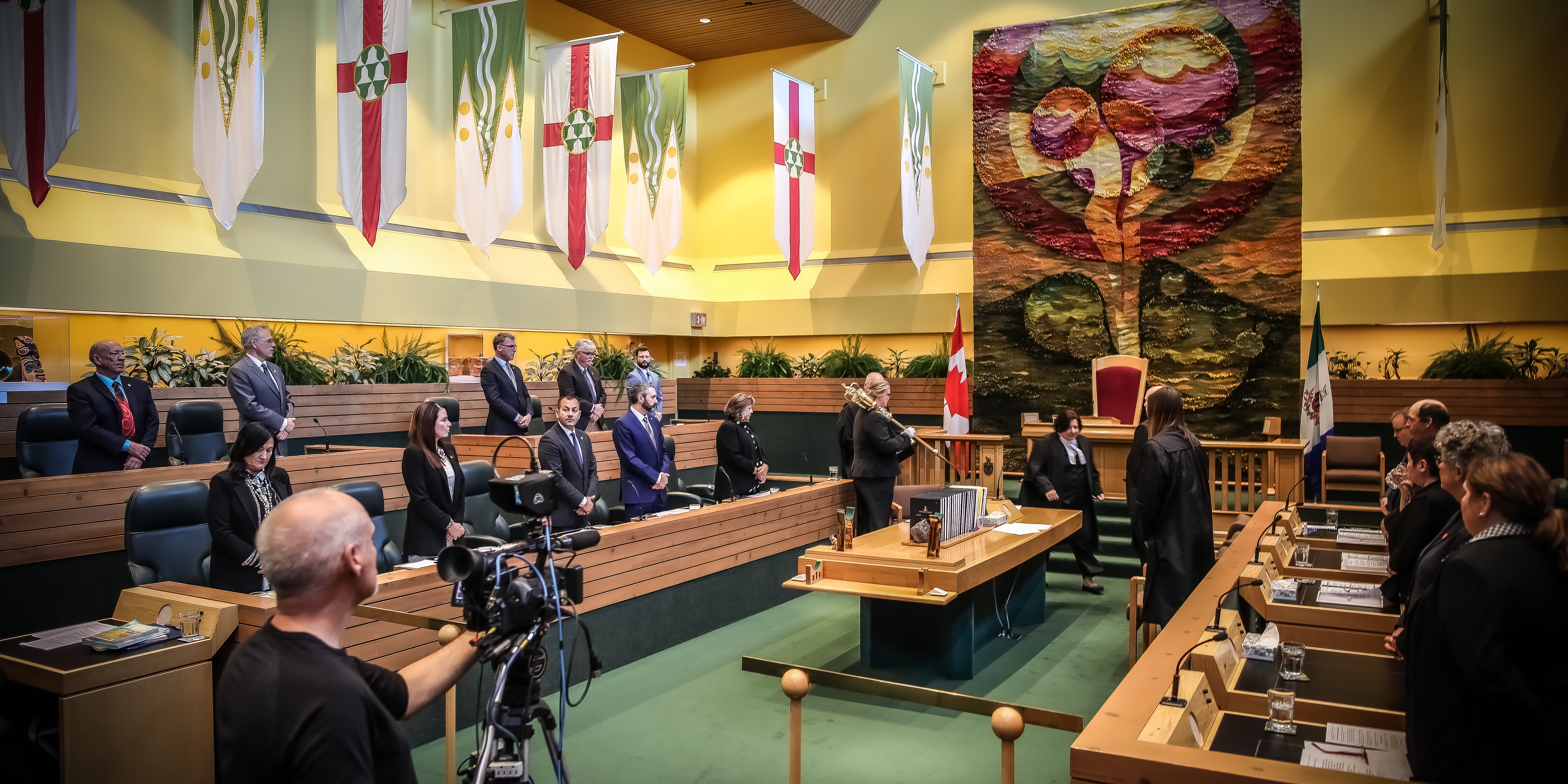 The first full week of the fall sitting of the Third Session of the 34th Legislative Assembly saw a flurry of action. Several pieces of legislation were tabled, setting the stage for a full Fall sitting. Get caught up on what happened and find out how the Yukon government is making life better for Yukoners.

This week all members of the Yukon Legislative Assembly unanimously supported a motion that reads:

THAT this House recognizes that Yukon is experiencing the impacts of a climate change emergency driven by human activity, which impacts the environment, biodiversity, Yukoners’ health and the Yukon economy, and urges the Government of Yukon to: (1) declare a climate emergency; (2) reduce greenhouse gas emissions; (3) ensure Yukoners have access to reliable, affordable and renewable energy; (4) adapt to the impacts of climate change; and (5) build a clean economy.

This follows the Speech from the Throne last week that stated “This government recognizes that there is a climate emergency.”

Our Liberal Caucus is pleased that a climate emergency has been declared and we are glad to see the government move in this direction. We remain focused on action, not just words, and we look forward to more green initiatives in Yukon so that together we can properly address this challenging issue.

Rules around vaping in Yukon

Minister Pauline Frost tabled a Bill that would replace the Smoke-Free Places Act in the Legislative Assembly this week.

The proposed legislation reflects best practices and modern-day realities by addressing smoking and vaping with a focus on protecting public health, especially youth. The Bill would increase the minimum legal age for access to tobacco and vapour products to 19 years old and lay out how vapour products must be sold, used and promoted.

Our Liberal Caucus is pleased to see that Bill No. 3 was developed following a public engagement with Yukoners about how vaping and vapour products should be regulated in the territory.

I am proud of the work our government is doing to protect the health of young Yukoners. This proposed legislation would increase the minimum age of purchase for tobacco and vapour products to 19 years old as part of our ongoing efforts to discourage the use of these addictive and harmful products.

Amendments to the Corrections Act were tabled in the Legislative Assembly this week.

The proposed amendments address segregation within Yukon’s corrections system and would align correctional services in Yukon with the universally accepted Mandela Rules regarding solitary confinement.

These proposed amendments to the Corrections Act would position Yukon as a leader in segregation reform and align the territory’s corrections with international best practices and minimum standards of care for those in custody. They would also ensure that our correctional system continues to be progressive and takes into account the needs of a diverse inmate population.

The 2019–20 First Supplementary Estimates were tabled this week.

The spending Bill includes an increase of $43.3 million in gross capital to prevent delays in completing infrastructure projects and to keep up with growing housing demands in the territory. It also includes an increase of $20.5 million in operations and maintenance, largely as a result of an early and long wildfire season lead in 2019. Recoveries in capital are expected to increase by $26.3 million.

The supplementary estimates reflect the growth Yukon is currently experiencing and the forward momentum of our economy. It is essential that we keep up with the needs of Yukoners as we continue to move towards a balanced budget.

The 2019–20 Interim Economic and Fiscal Update was also tabled this week in the Legislative Assembly. Yukon’s economy continues to perform well, with broad-based indicators projecting gains in population, continued labour market strength and growth in real Gross Domestic Product. Low unemployment and continued population growth contribute to the positive outlook.  There have also been better-than-expected gains in labour earnings and continued growth in retail sales. Yukon’s finances remain on track to return to a surplus in 2020–21.

Among other details, the Interim and Economic Update notes that the development timeline for the Coffee gold mine is unclear in light of the recent merger of Goldcorp and Newmont Mining Corp. At the time of the merger, as noted through various industry channels, Newmont publicly stated that it would be evaluating its project portfolio. At the September 2019 Denver Gold Forum, Newmont Goldcorp noted that the Coffee project has not yet been approved by the new company’s Board of Directors, but included Coffee as an example of the company’s long-term options. Of course, the uncertainty about the timeline does not imply that the project’s economics have changed, and the Coffee project remains in the forecast for Yukon.

In Question Period on Wednesday, Scott Kent, the MLA for Copperbelt South, demonstrated the lack of research that tends to inform Yukon Party questions when he asked why the Interim and Fiscal Economic Update noted the uncertainty around Coffee’s timeline, and then went on to criticize the Yukon government’s Economic Research branch by suggesting that the uncertainty was “not accurate”, “unconfirmed” and “pure speculation”.

Our Liberal Caucus values the work of the Yukon government’s Economic Research branch and the diligence they put into their economic forecasts and updates. These documents are vital for proper planning and help to inform the government’s actions so that Yukon’s financial position will remain sustainable for the long-term. They would not be doing their job if they didn’t consider the possibility that the Goldcorp and Newmont Mining Corp. merger may impact the development timeline of the Coffee Gold project. In an interview with the CBC, a Newmont Goldcorp spokesperson confirmed the Interim Fiscal and Economic Update was accurate and responsible:

Yukon College is one step closer to becoming a university after the Yukon University Act was tabled this week.

The Bill would support reconciliation with Yukon First Nations and ensure Yukon University remains a hybrid institution that offers university-level programs and college-level programs such as trades and apprenticeship, adult basic education and academic upgrading.

This Bill would allow Yukon College to become Yukon University, Canada’s first university north of 60. Our government is proud to deliver on our commitment to support Yukon College in its transition to Yukon University in a way that reflects the Yukon’s unique northern context and supports the growth of post-secondary education in northern Canada.

A modernized Liquor Act was tabled this week by John Streicker, Minister responsible for the Yukon Liquor Corporation.

Our Liberal Caucus is pleased to see that the Bill aims to balance social responsibility with economic opportunity, while improving transparency around governance and clarifying roles and responsibilities for enforcement.

The proposed new Liquor Act will allow us to improve how we manage responsible alcohol sales, service and consumption in the territory while at the same time increasing economic opportunities for local producers and licensees. In talking to Yukoners, we heard a strong message of reducing alcohol-related harm and supporting responsible consumption.

A Bill to amend the Elections Act was tabled this week in the Legislative Assembly.

The proposed amendments would allow for greater flexibility and more convenient registration and voting options as well as increase access to voting by special ballot.

These changes were identified by Elections Yukon and recommended by the Members’ Services Board.

These proposed amendments are designed to strengthen our democracy and ensure the integrity of the election process. The changes would fully operationalize the Yukon permanent voter database and make voting processes clearer and more accessible. Bringing forward these changes now will provide Elections Yukon with the time needed to develop the new permanent Yukon voter register.

A new Technical Amendments Act was tabled this week.

The Bill proposes amendments to three current pieces of legislation to align with court decisions and with recent federal legislative changes: the Safer Communities and Neighbourhoods Act; the Jury Act; and the Crime Prevention and Victim Services Trust Act.

Amendments to Yukon’s Jury Act would allow those who have been sentenced to a term of imprisonment of less than two years to serve on a jury.

Amendments to the Crime Prevention and Victim Services Trust Act would make the application of fine surcharges under the Act discretionary.

This Bill addresses a number of outstanding issues in current legislation that would ensure our laws remain clear, consistent and effective.

Last month, we started an Instagram profile. It’s a casual place to post photos from the many events our Liberal Caucus take part in, from Orange Shirt Day to the Sisters in Spirit vigil to a dam tour with BC Premier John Horgan. Give it a look and stay informed with @yukonliberalcaucus on Instagram.