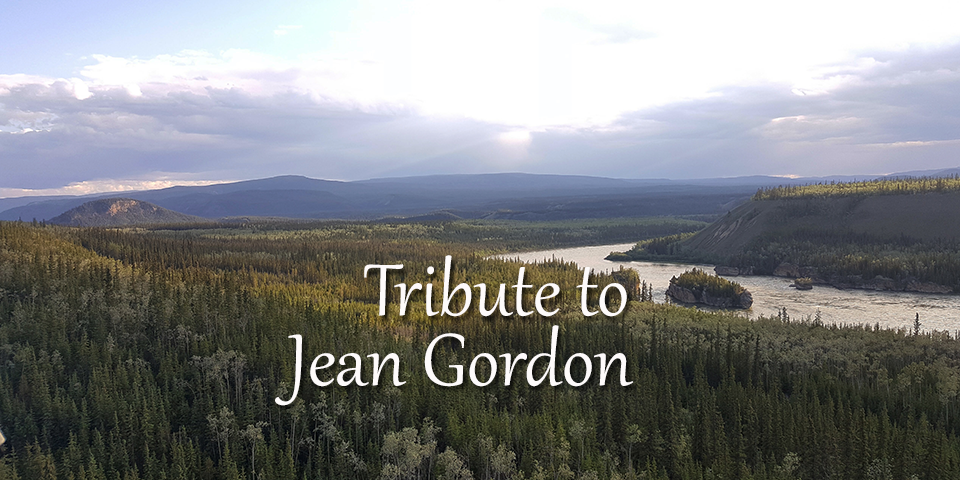 On Monday, November 6, 2017, MLA Don Hutton rose in the House and gave tribute to Jean Gordon – 1st Woman Elected to the Territorial Council.

It’s an honour and a privilege for me to
rise in this House today to pay tribute to a true Yukon pioneer,
Gertrude Jean Gordon. Jean was born in Vancouver, BC on
March 6, 1918 to Scottish parents, George and Christina
Matheson. At the age of 19, she married Wilf Gordon in 1937.
They spent the next 56 years together. Their daughter, Betty,
was born in August 1939 in the Dawson hospital. In 1945,
Jean and Wilf made the decision to move to Mayo and
enrolled their daughter in school, and the community was
better for it. I’m proud to say that Jean was a friend and
mentor of mine for many years when she and Wilf lived in
Mayo.

Jean remembered fondly the early years when she and
Wilf lived a very independent life, hunting, trapping, fishing
and cutting wood. One day when Wilf and Jean’s brother,
George, were out hunting moose in January, they came across
a bear den. They had to kill the bear, only to discover it had
three cubs. The cubs were so small that all three of them
would fit into a cigar box. They brought the cubs home, and
Wilf and Jean’s dog raised the cubs as her own until they were
grown and able to look after themselves, at which point they
returned to the wild.

Another time, Wilf came home with a wolf and her two
pups with plans to have some part wolves for his dog team.
The female never did produce pups for the dog team as she
never came into heat. Jean was particularly proud of both
these stories because they were published in the Alaska
Magazine.

Jean’s life and the Yukon Territory would forever change
on September 11, 1967, the year of Canada’s centennial. That
day, almost 50 years from the day women gained the right to
vote and to run as candidates in Yukon territorial elections,
which was in 1919, Jean Gordon became the first woman to
be elected to the Yukon Territorial Council since it was
created in 1898 — the Member for Mayo.
Jean brought a down-to-earth rural perspective to her
work as one of seven members of the Yukon Territorial
Council. It meant long hours travelling to council sessions in
Whitehorse in her battered Volkswagen Beetle, often in
winter. In 1969, Jean travelled to Ottawa with the other
council members and Commissioner James Smith to lobby
Prime Minister Pierre Trudeau for more autonomy for the
Yukon. As a result of these efforts, the federal government
created an executive committee for the territory, the first step
toward self-government in the territory. As Jean said — and I
quote: “We became sort of a cabinet or the forerunner to a
cabinet.”

Jean Gordon was a trailblazer and really led the way for
women in Yukon politics. Female candidates have run and
won in every territorial election since Jean was elected in
1967. Sadly, Jean passed away in Mayo in 2008. Over the past
50 years since Jean was first elected, Yukon women have
been Premier, Speaker, Cabinet minister, Leader of the
Official Opposition, Leader of the Third Party, and the federal
Member of Parliament.

Jean was a passionate, well-read and eloquent community
activist, Mr. Speaker, and I am proud to have called her a
friend. As I look around this House today, I see the seven
strong female representatives who each bring their own
passion, dedication and eloquence to this Legislative
Assembly. I believe, Mr. Speaker, we all owe a huge debt to
Jean Gordon, who didn’t just hit the glass ceiling; she
shattered it for all those who came after.

Thank you, Jean, from all of us. Thank you, Mr. Speaker.