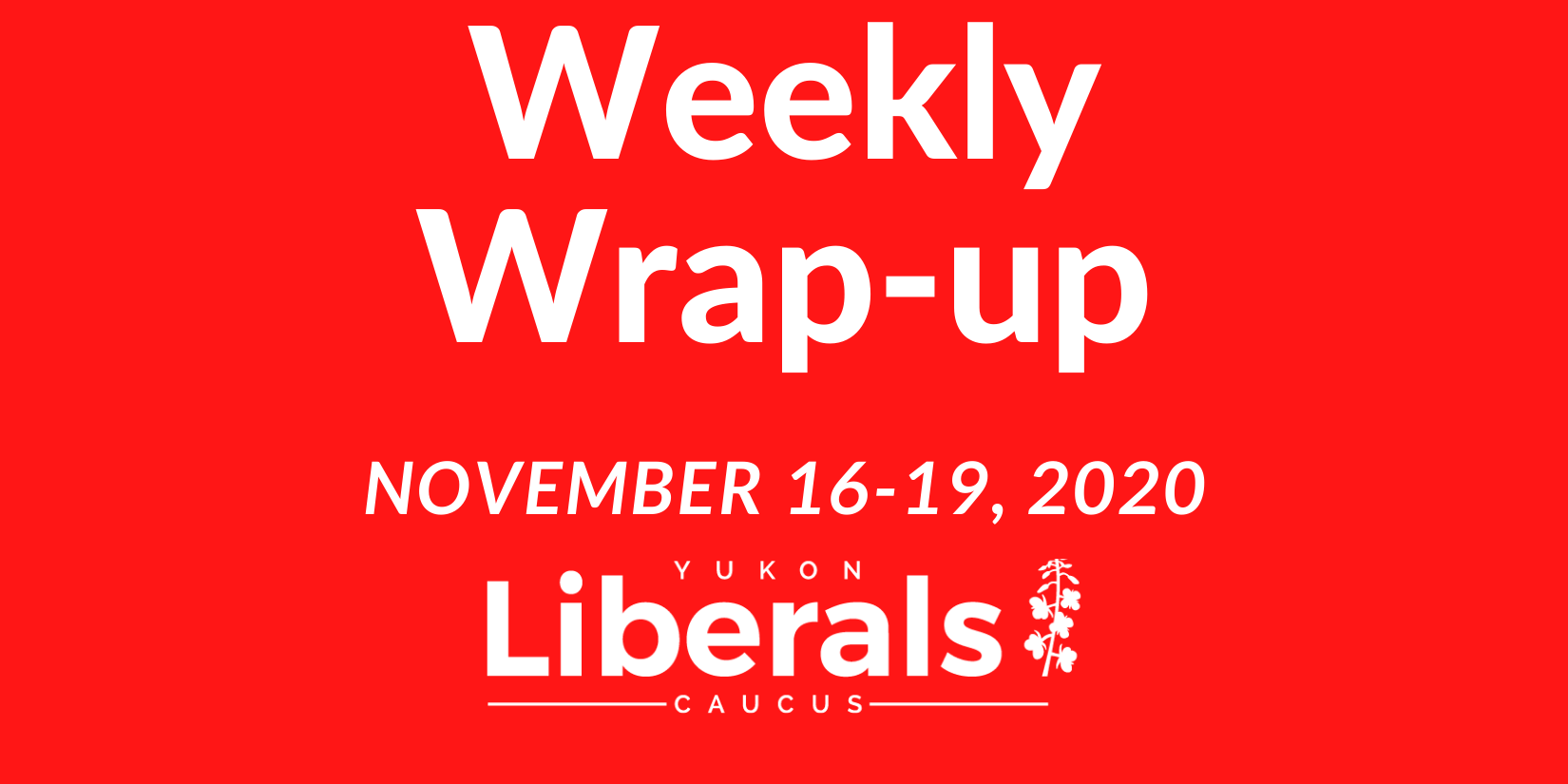 Here is a quick overview of what happened in the legislature this week:

On Wednesday afternoon, MLAs once again discussed the following motion, brought forward by Copperbelt North MLA Ted Adel: “That this house supports the current state of emergency in Yukon”.

MLA Adel issued the following statement about the motion:

“Today, for the third time this sitting, we are asking the Members of the Legislative Assembly to vote on whether they think Yukon should be in a State of Emergency. It is a simple question, but the last two times we brought the issue forward, the conservative Yukon Party took pains to avoid a vote.

Yukon Party MLAs have consistently refused to take a stand on the issue, preferring to avoid the issue by reading HANSARD transcripts, old notes and press releases in the Legislative Assembly.

Why does the Yukon Party refuse to vote on whether Yukon should be in a State of Emergency?

The State of Emergency enables the Yukon government to take action to protect the health and safety of Yukoners. This includes border restrictions, self-isolation requirements for those entering the territory, and the requirement for those transiting through the territory to do so within 24 hours and stick to their designated route. Under the State of Emergency, the government has also provided relief to tenants and landlords impacted by COVID-19.

Does the Yukon Party want to end the State of Emergency?

Do they want to end border restrictions that keep Yukoners safe?

Do they want to end self-isolation requirements?

Do they want to end support for tenants and landlords impacted by COVID-19?

Why won’t they say?

Do they agree that we should be in a State of Emergency or not? Today we’ll find out if they’ll take a stand or continue to dodge the question.”

We are pleased that, at the last possible minute, the conservative Yukon Party chose to support this motion. We now know that they DO support the current state of emergency, though it is not clear what took them so long to take a position.

A commitment we made to Yukoners in 2016 was to create fixed election dates, and we are following through on that commitment. Proposed legislation is currently before the House that, if passed, will mean that elections will be held every 4 years starting in 2025.

Currently, Yukon and Nova Scotia are the only two jurisdictions in Canada without fixed election dates.

Since coming into office, we have been clear that this was something that would be put in place during our mandate. It was made clear in the Premier’s mandate letter.

We are proud to follow through on the commitment we made for Yukoners.

On Wednesday, Minister Pillai gave two important tributes – one in honour of Innovation Week in Yukon, and the other celebrating the launch of the Yukon U Incubator.

Back in 2019, a pilot incubation program at Yukon University ran with three Yukon start-ups: Proskida, Apprendo, and Yukon Soaps Company. Based on the success of this pilot program, Yukon University has taken another exciting step. IncubateNorth, Canada’s first regional incubator, will welcome northern entrepreneurs and innovators with a market-ready solution with a support structure to grow their business in Yukon and beyond

This year, Yukon Innovation Week runs from November 16-22. This week helps raise awareness of our innovative and entrepreneurial community. There are several events happening this week at the NorthLight Innovation space and online and we encourage everyone to participate and help celebrate this vibrant community.

On Wednesday, Minister Mostyn shared the exciting news through a ministerial statement that Yukon Government is moving forward with its public service plan to achieve a representative public service that is inclusive of Yukon First Nations people.

This new plan was developed in close collaboration with Yukon First Nation government representatives and is aligned with one of our government’s key priorities — working toward reconciliation. Increasing opportunities for training and capacity development with Yukon First Nations is also a key part of this. Breaking Trail Together includes a 10-year strategic plan and an operational plan that will be renewed every three years.

As part of this plan, a new pilot project was launched in October around recruitment efforts, aimed at increasing the number of indigenous employees at Yukon Government. While competitions remain open to all candidates, this initiative gives preference to qualified indigenous people, with a priority to Yukon First Nations applicants. This pilot project will run for the next 18 months.

Yukon Hospital Corporation in as Witnesses

On Thursday, witnesses from the Yukon Hospital Corporation were in the legislature answering questions from MLAs. You can read the transcript here: https://yukonassembly.ca/sitting-day/34-3-065

You can read YHC’s most recent annual report here: https://yukonhospitals.ca/publications