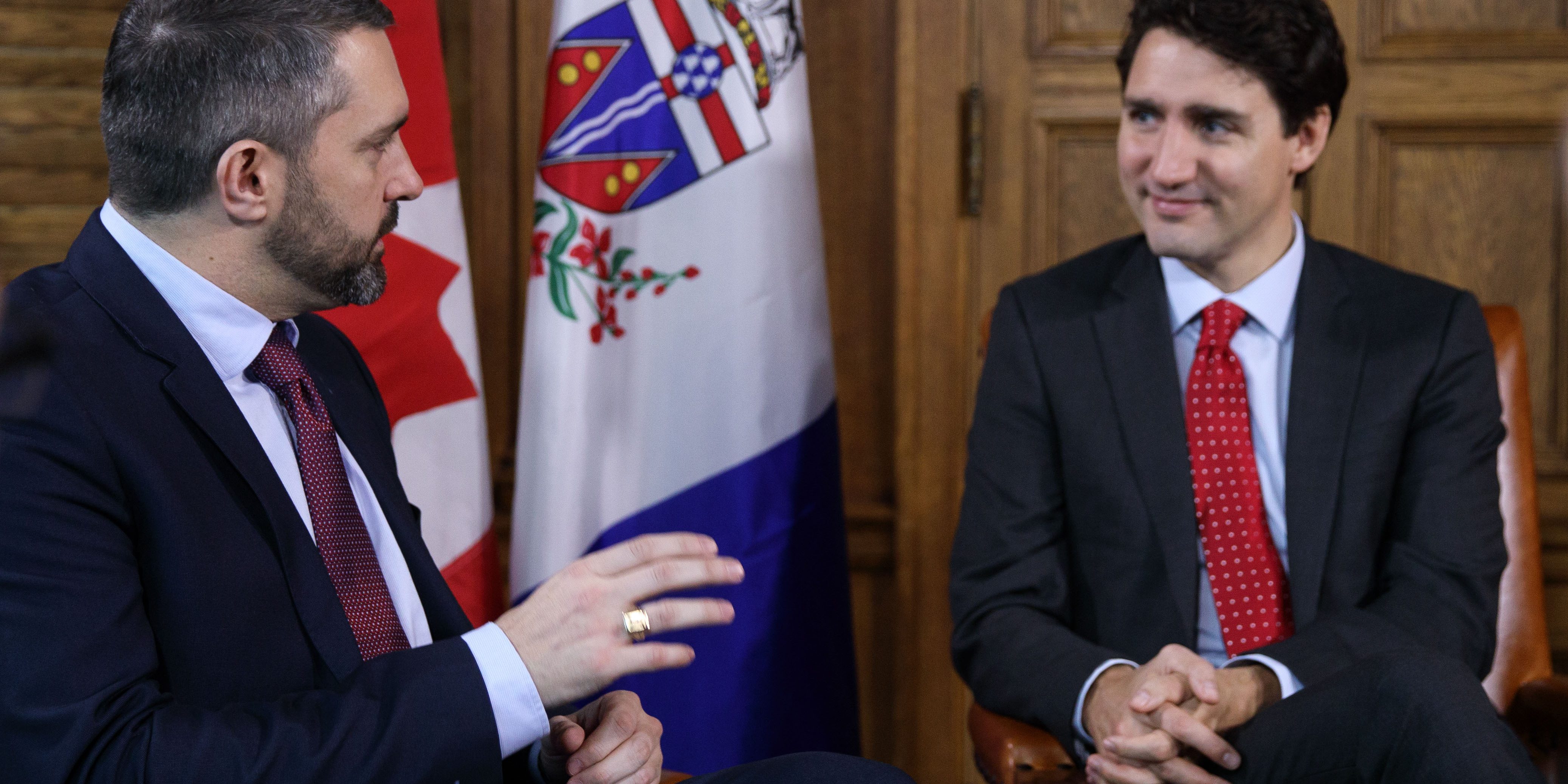 This week the Government of Canada released its 2019-20 Budget.  Our Liberal Caucus was very happy to see investments in education, infrastructure and economic reconciliation in the Yukon.

Since taking office, our Liberal caucus has focused on building strong, cooperative and respectful government-to-government relationships with municipalities, Yukon First Nations and the Government of Canada. This collaborative approach has helped to create a unified voice to advance territorial priorities at the federal level.

The budget proposes $1.4 billion over seven years to forgive all outstanding comprehensive claim negotiation loans, and to reimburse Indigenous governments that have already repaid these loans.  Premier Sandy Silver has participated in a number of meetings about this long-standing issue, and our Liberal Caucus is very pleased to see it addressed in the 2019-20 Budget.  This is a step towards economic reconciliation with Canada’s Indigenous people, including Yukon First Nations.

For the three northern territories, there is an increase of up to $400 million dedicated to transportation infrastructure. These funds will help to boost our investments in upgrading aging infrastructure across the territory and ensuring it will meet the needs of our growing territory.

There are other investments that will continue to grow and diversify our economy such as the additional $75 million over five years to the Canadian Northern Economic Development Agency to enhance its current economic development program.

Another highlight for Yukon is up to $26 million for Yukon College’s new campus science building to further support its efforts to become Canada’s first university in the North. Our Liberal Caucus members have supported this plan in discussions with many federal Ministers since taking office and are pleased to see Canada’s continued investments in research, education and training in Yukon.

In addition to these specific announcements, there will be an overall increase in federal transfers of $50 million over the previous year.

These investments are excellent news for Yukoners and are a testament to the strong working relationships we have developed with Yukon’s Member of Parliament Larry Bagnell and the federal government.

“The Government of Canada’s 2019–20 Budget includes a number of important allocations for Yukon, which I believe are a direct result of the positive, collaborative relationships our government has established. I look forward to continuing to work together with our partners and the federal government on behalf of Yukoners to meet the needs of our northern communities.”

This week Minister of Highways and Public Works Richard Mostyn informed the Legislative Assembly of plans to create a new Motor Vehicles Act for the Yukon. The current Motor Vehicles Act was first introduced in 1977 and governs the use of almost 5,000 kilometers of maintained highways throughout the territory. All Yukoners have a stake in the modernization of this out-of-date legislation to reflect the realities of our modern Yukon.

There are many issues to address when it comes to motor vehicles. As Minister Mostyn noted, Yukon has the lowest rate of seat belt usage in the country and the highest rate of impaired driving in Canada. Yukon also has the second highest causality rate resulting from traffic collisions in all of Canada.

Development of new legislation will include reviewing penalties against motorists who choose to drink and drive, determining whether camera surveillance could help make roads safer, how to better protect pedestrians and cyclists and how to promote the safe use of off-road vehicles. By making the first major improvements to the Motor Vehicles Act since it was introduced more than 40 years ago, the Yukon can be a leader in road safety.

We were surprised to hear from the Leader of the Yukon Party that, “The whole thing to me sounds like a solution in search of a problem.” This is the same leader who informed Yukoners: “I’m not gonna give away all my ideas.”

Our Liberal Caucus believes it is important to hear from Yukoners about how they want our roads governed so that we can balance safety and access with Yukon’s rich transportation traditions.

“We have held more than 200 community meetings. Through those community tours, we hear about motor vehicle infractions and motor vehicle concerns and concerns about our highways probably more than any other issue collectively.
We are happy to be going out to the public this spring for their thoughts on how the act can be improved.”

We encourage all Yukoners to provide their input into the new development of the new Motor Vehicles Act. The Yukon government has been researching legislation, fines, penalties and data to inform the new legislation. A public survey will be launched soon, and social media posts, Facebook events and open houses will also be conducted to gain insight into Yukoners priorities around road safety. The government is also planning to host open house events in Yukon communities and have meetings with Yukon First Nation governments and affected groups to gather feedback.

Our Liberal Caucus is committed to working with community partners to improve road safety across the Yukon.  This year the government doubled the fines for drivers who fail to stop for school buses or pass them illegally. Last year the government also increased fines for speeding and distracted driving.  In both cases, the fines were increased to the maximum allowed under the current Motor Vehicles Act. We have heard from many Yukoners that the fines are not high enough, and the development of new legislation will allow this issue to be addressed.

This week Mayo-Tatchun MLA Don Hutton brought forward a motion that Yukon’s Legislative Assembly support economic reconciliation with Yukon First Nations as a means of achieving a more prosperous and economically vibrant territory for all.

Our Liberal Caucus campaigned on the commitment of respectful government-to-government relations with First Nation governments. Since taking office, we have approached collaboration in a number of ways, guided by the concept that when we meet together and speak face to face, we can move forward in the same direction. This has been reflected in the reinvigoration of the Yukon Forum to foster frank and honest discussions about relationships, priorities and goals for our territory.

Our Liberal Caucus believes First Nations are our partners when it comes to developing our economy and that by working together, we can ensure all Yukoners share in the benefits of growing and diversifying our economy. We were pleased that the motion received unanimous support in the Legislative Assembly.

“What’s important to recognize is that our goals as governments are ultimately the same. We want a better life for our people and positive improvements to the well-being of our communities. Reconciliation is about coming together and uniting around these common goals. It’s a wonderful and powerful thing to have all First Nation governments and the Yukon government advocating for Yukon issues in unison.”

Copperbelt North MLA Ted Adel brought forward a motion this week urging the Government of Yukon to work with the City of Dawson to find a suitable replacement for the community’s waste-water treatment facility.

Earlier this year, Community Services Minister John Streicker acknowledged that the lifecycle of the facility has been severely limited by rising costs and performance issues. The Yukon government has also said that after several years, under normal operating conditions the wastewater treatment plant is now only marginally capable of meeting effluent discharge standards. The government and the City of Dawson spend just under $1 million each year to operate the plant, many times more than any other community. These details confirm a former Yukon Party MLA’s speculation that the Yukon Party project was a “lemon”.

“The previous government told Yukoners that the Dawson water treatment facility would cost $340,000 per year to operate. It was quickly realized, once the plant began operations, that the O&M on this facility was several times what was promised on a $25-million project that didn’t work — or at least, didn’t work as designed.”

Our Liberal Caucus supports the government working together with the City of Dawson to determine the best long-term, sustainable solution for the community. We were pleased that the motion received the unanimous support of the Legislative Assembly.

This week Porter Creek Centre MLA Paolo Gallina brought forward a motion urging the Government of Yukon to continue to invest in a broad range of housing initiatives.

The Yukon government has been aggressively expanding support for new housing in the Yukon through a variety of initiatives and partnerships including:

“Safe, adequate housing that meets the needs of families and individuals, particularly vulnerable populations, is extremely important.
A key commitment of this government was to address housing shortages at all levels of the spectrum. We committed to work with communities to create available developed land banks to keep lot prices affordable. We committed to advocating together with Yukon First Nations to ensure self-governing and non-self-governing First Nations are included in the federal First Nation housing strategy, and we committed to prioritizing federal funding toward the creation of affordable housing.
I am very proud to be part of a team that has worked so diligently to uphold their commitment to Yukoners.”

Our Liberal Caucus supports continuing investments to address the housing challenges that we face across the territory, and we were pleased that the motion received the unanimous support of the Legislative Assembly.

The Spring Sitting of the Legislative Assembly wraps up on April 30, 2019.